As you move to the right across the three classes of tools in the Trinity there's a gradient; they're more **curated**. 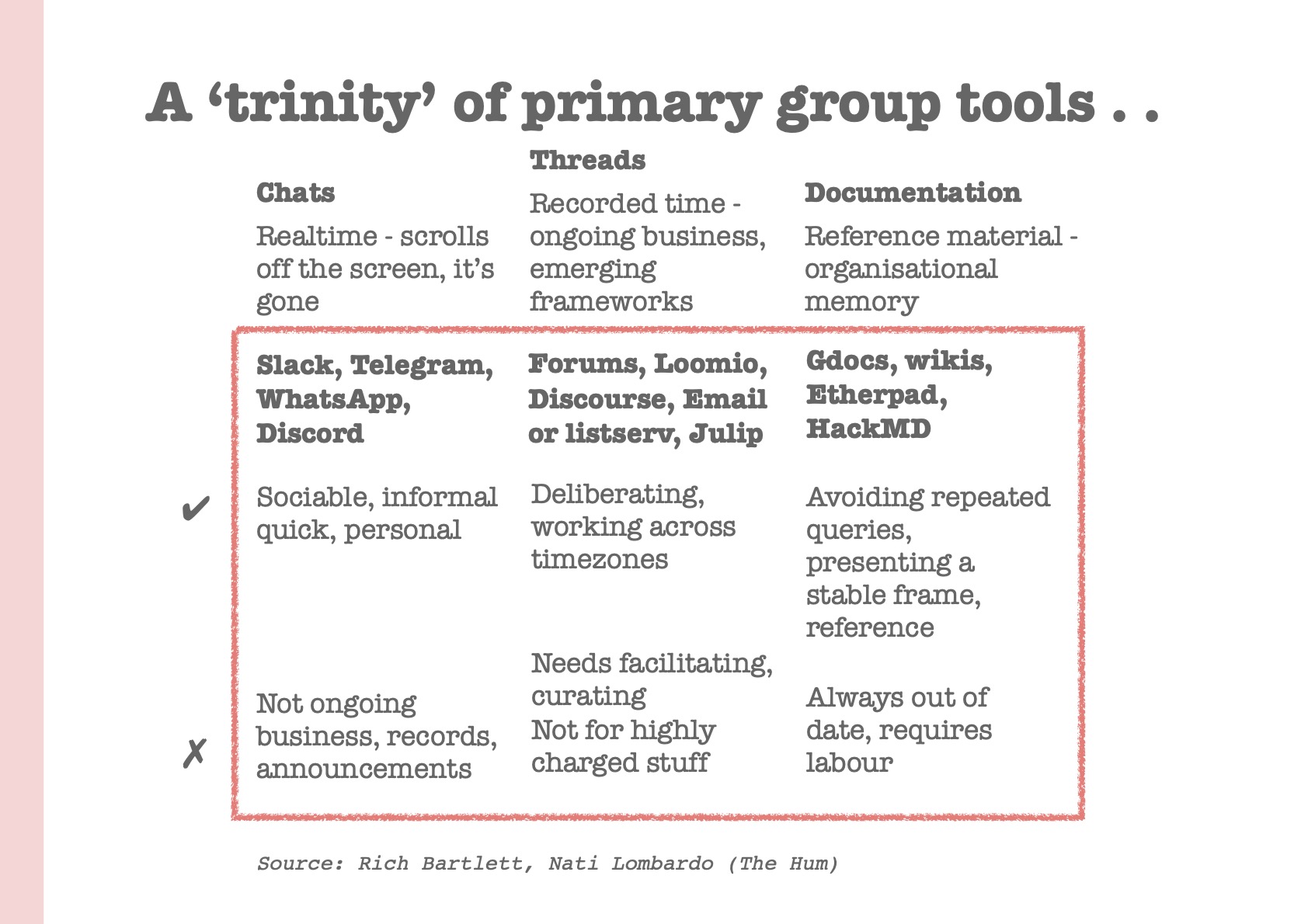 Over on the left, things are ad hoc. Nobody really goes back and refers to things, there is no work that's required to organise this stuff over time; everything just scrolls off the top of the screen, and is rarely looked at again beyond the next hour or 24 hours.

And as you move over to the right you have to put in more and more effort to organise what you've written, what you choose to put into durable media, how it can be accessed and how it might be read, an indefinite amount of time later.

Over on the right things are *institutionalised* to some extent: FAQs, authoritative guides, how-tos, repositories of significant community media, stock references, handbooks, common maps or lists. There's a whole lot more **labour** in a wiki for instance, than in a Telegram chat.

Being able to work backwards and forwards over that whole range in the Trinity is really important - in terms of . . - the *infrastructure* of commonly accessible tools - the distribution and currency of *skills* - the amount of (skilled) *labour* they call for, and - the regime of *stewarding* (aka governance) that underpins the privileges and disciplines called for by differing degrees of permanence, authoritativeness and reliability.

**Documentation** The documentation dimension here is vital because, if we're trying to deal with **systemic issues**, you can't do that in a threaded medium or chat medium, you have to basically *build a structure* of documentation or information of this kind.

If you're trying to deal with systemic matters, you can't do it in chat, and you can't do it in in threaded media either. So there is some quite interesting kind of **dance** that we need to be able to do across these three elements of trinity-infrastructure - a dance of literacy and labour-of-curating and stewarding. This is related to (an aspect of) the Dance of knowing

We need all of these modes and categories of tools. The ways in which they work are different, and we need to be able to dance backwards and forwards across this whole range.

**Curating** I want to stress this thing about curating. Collaborating with people, I’m aware there’s a difference between those who've just ‘got to’ curate all the time otherwise they’ll fall to pieces and lose their frame, and people who just want to dive in and thrash it out in one great big, long, live stream.

I think that's partly personality. I’m not sure what else it is. It does have a politics - the 'live-streamers' can move a whole lot faster, carrying the day by force of traffic: fiat.

This work of curating is something that not everybody likes to do but I think we're in a mess if *nobody's* doing it. So there’s some kind of division - or gradient, or dance, or *political economy* - of labour and of skill and of aptitude, across the trinity, that has to be considered.